All Collections
Why Verdigris?
Customer Testimonials
How Energy Service Companies use Verdigris to Increase Revenue

How Energy Service Companies use Verdigris to Increase Revenue

Written by Matt Eversman
Updated over a week ago 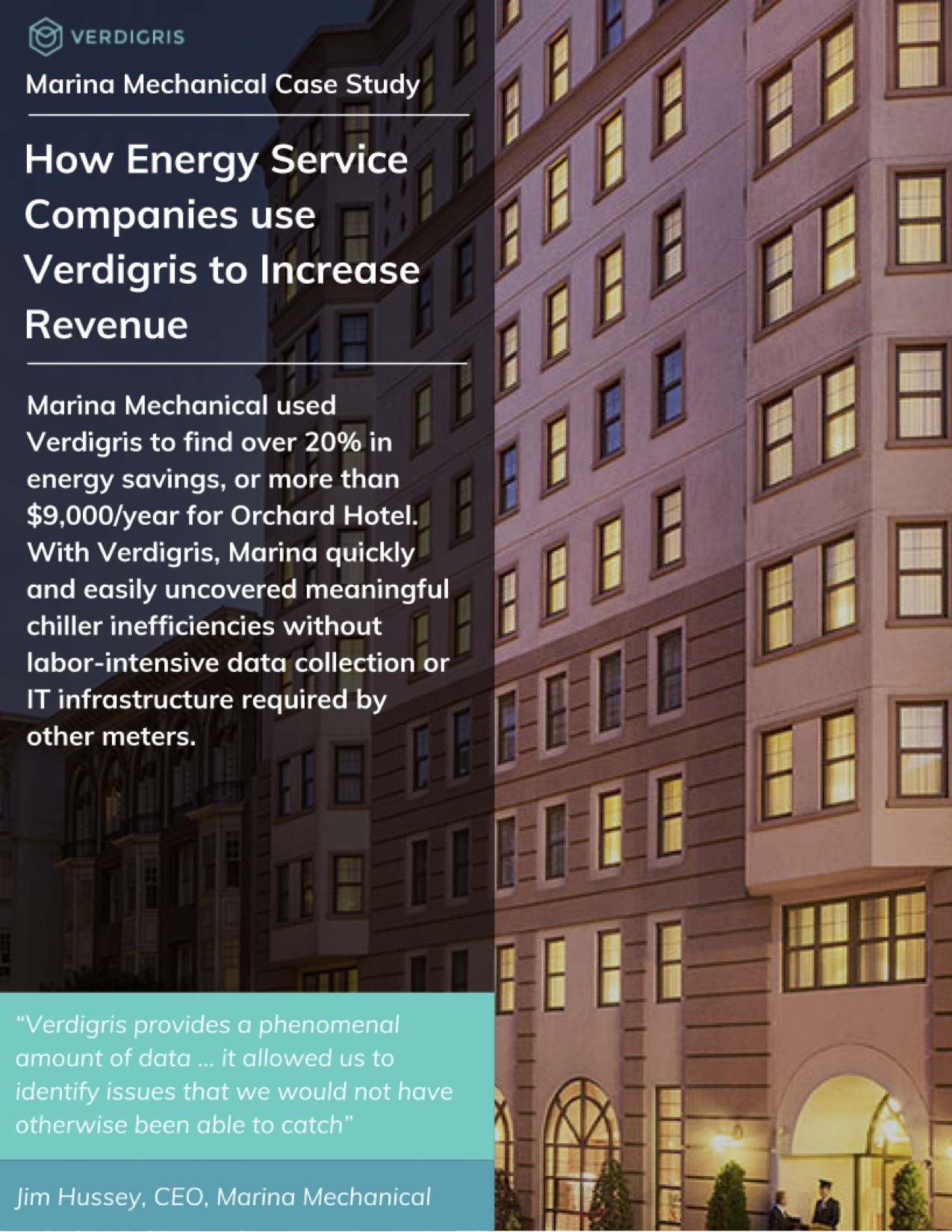 Marina Mechanical is a highly-skilled Energy Service Company (ESCO) in the San Francisco Bay Area. In 2017, Marina was consulted by an energy-conscious hotel group in San Francisco, The Orchard Hotels, to look for opportunities to improve energy use. Normally, this would require installing dozens of data loggers with labor intensive manual (on-site) data collection or installing IT/networking infrastructure to retrieve the data from a standard BMS energy meter 3 circuits at a time. Both of these options require hours of manual data entry and analysis.

Fortunately for Marina, Orchard was already using Verdigris for energy intelligence, which gave them 100% coverage of the Orchard properties down to individual circuits and equipment phases by the minute. Even better, there was no software to install or proprietary file formats to deal with, Orchard simply had to grant login access for Marina to Verdigris’ cloud-based web analytics platform and Marina was able to get started immediately without even leaving the office. Had Orchard not yet installed Verdigris the process would still have been nearly as quick and painless, with installation typically taking less than 30 minutes per panel and energy data available in less than 24 hours.

Verdigris is a powerful IoT energy analytics platform that uses artificial intelligence to deliver energy insights many customers have never had access to before. Through the Verdigris analytics dashboard customers can see sub-second electricity data for each metered circuit in their property portfolio. Each system can monitor up to 42 circuits in real-time. Most other meters are only capable of 3-4 circuits per system in 15-minute increments, which is why Verdigris is the lowest-cost solution per metered endpoint in the industry. With Verdigris, Marina was able to deliver more precise recommendations in less time and with lower costs. Further, once the meters are installed they will function continuously, enabling ESCOs like Marina to offer additional ongoing services and recurring revenue streams without scaling labor workforce.

Marina started by looking at how Orchard Hotels was implementing its energy efficiency strategies, specifically around HVAC, to see if there were opportunities to reduce energy consumption. After looking at the mechanical systems, Marina noticed that the machinery was not operating as efficiently as it could. Marina knew that when refrigeration equipment cycles on and off many times within an hour--known as short cycling--it’s often an indicator of a problem with heat transfer or incorrect setpoints. These systems should run for a reasonable amount of time before shutting off to rest. However, in the case of Orchard the chillers were cycling on and off rapidly.

Additionally, the chillers were operating at times of day when they normally shouldn’t be. This is demonstrated by the energy data from Verdigris in Figure 1. 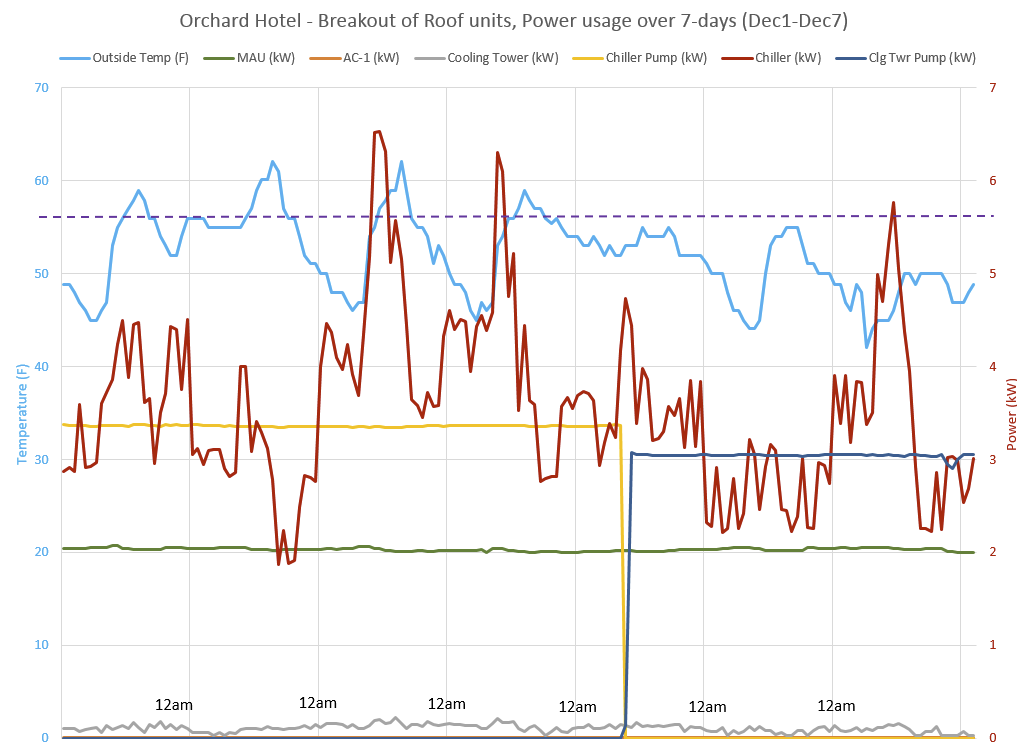 The purple dashed line represents an important control point that occurs when the outside temperature is 55°F. At that temperature the system should change over from mechanical cooling to the economizer to utilize what’s known as “free cooling”, or using the cooler outside air to regulate the climate inside. In other words, when the economizer is operating properly, one should not see the compressors running when the outside temperature is below 55°F. In the case above, low correlation (between weather and chiller demand) is a function of 2 issues – the proper setting or function of the economizer, and the impact of occupancy on the internal building load.

Based on the analysis above, Marina provided recommendations to Orchard resulting in more than $9,000 / year in energy and demand savings. We calculated this as follows. The measured energy savings were 510 kWh / week:

These savings were measured over a single week during the winter season. If we approximate those savings per month then we see roughly ~6,700 kWh in energy savings for the winter quarter. With an overall energy usage of ~35,000 kWh this corresponds with a ~20% reduction in energy usage.  Assuming an average energy cost for San Francisco (where the hotel is located) of $0.11 / kWh the total energy savings for the winter were ~$1,000.  Since this is energy savings in cooling we assume that the savings are higher during warmer months (25% higher for spring / fall and 50% higher for the summer) resulting in ~$4,400 / year in energy savings. We also looked at the reduction in peak demand costs.  The changes reduced demand by 14 kW--the highest peak before the retrofit in November was 42 kW compared to ~28 kW in December after the retrofit.  Based on the utility rates, this corresponds with savings based on demand changes of ~$4,600.  Therefore the impact of the changes was ~$9,000 / year in savings.

In addition to the energy savings from the chiller and pumps, Marina also found that the chiller condenser was not operating correctly. Opening the chamber revealed an accumulation of debris from the water tower. By identifying and resolving this issue, Marina was able to help Orchard reduce energy consumption by eliminating the number of surges, while also extending the life of the equipment. The savings calculated above do not include the additional benefits from reduced maintenance costs and increased operational life for multi-million dollar equipment.

The ease by which Marina was able to access the data in the Verdigris Analytics Dashboard allowed them to quickly understand how the hotel was operating in relation to how it was intended to operate. It helped Marina quickly and cheaply troubleshoot issues at Orchard, prioritize where to focus maintenance resources, and ultimately deliver better recommendations for less.

“Verdigris is a fantastic tool that provides a phenomenal amount of data. We really liked the granularity of data because it allowed us to drill down and identify the issues that we would not have otherwise been able to catch. Verdigris was collecting data down to the minute and with that data we were able to spot times when chillers were running when they shouldn’t be.” - Jim Hussey, CEO, Marina Mechanical 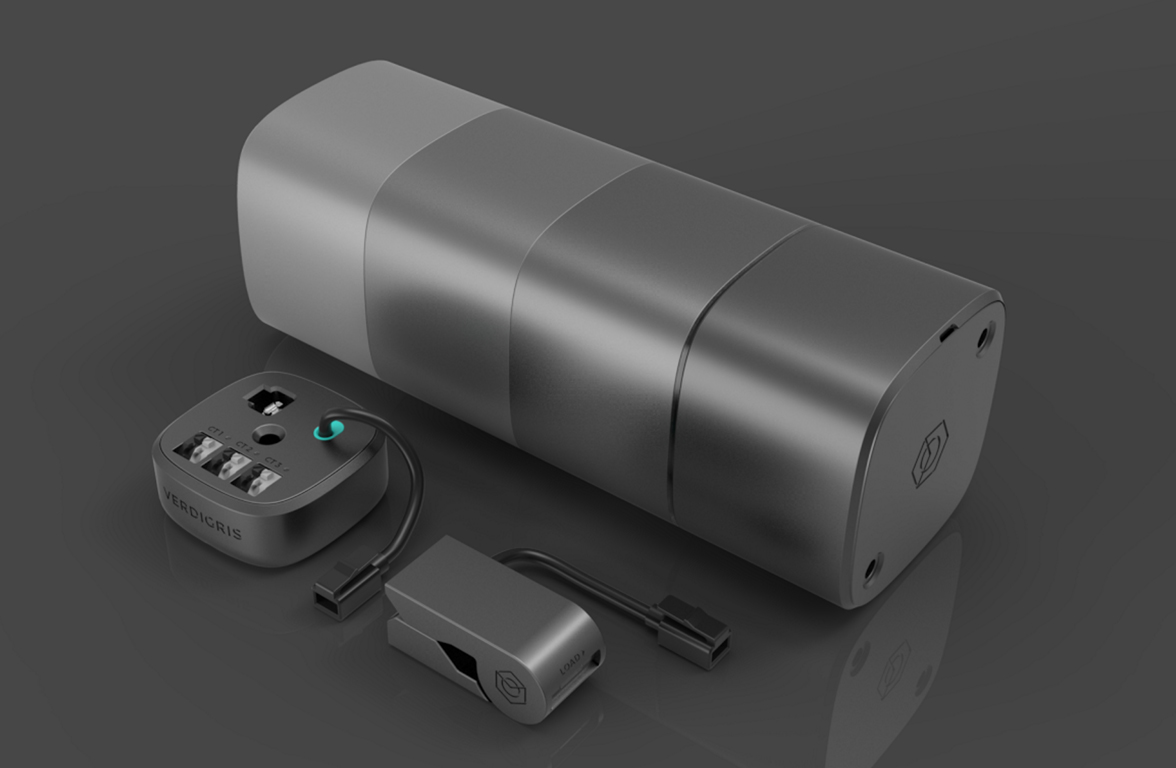 To learn more about what Verdigris can do for your company, contact us:

Did this answer your question?