All Collections
Frequently Asked Questions (FAQ)
Communications
How much data does a Verdigris system use? What if connectivity is lost?

How much data does a Verdigris system use? What if connectivity is lost?

Data storage, connectivity, data use
S
Written by Support
Updated over a week ago

Data use in Verdigris systems varies widely. Akin to the differences in data use on mobile devices from running applications and streaming data, data consumption on Verdigris systems depends on the number, characteristics and behavior of the equipment monitored. Mitigating factors that affect data use are 1) frequency of data transmitted to the cloud and 2) the number of circuits monitored. As context, a chart showing the approximate bandwidth of common data streams compared to a Verdigris system is below: 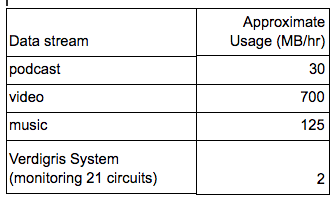 Verdigris sensors act as passive devices, collecting read-only energy data on a circuit. The sensors sample at a high frequency (8kHz or 8,000 cycles per second).  Such large amounts of data are generated that big data strategy is a must. Part of the Verdigris strategy involves edge processing, algorithms and compression. The data transmitter collects, processes, and characterizes the energy data as unique electrical waveforms. It requires 1.6KB to transmit the data characterizing a waveform to the cloud.

How often a waveform is transmitted to the cloud matters. A sensor that is monitoring equipment with frequent energy fluctuations, such as elevators, may detect and send discrete waveforms every two to three seconds. This single circuit could use approximately 2MB/hr of data. By contrast, sensors on equipment with consistent and redundant consumption patterns, such as office lights, may transmit waveforms at a slower cadence of every few hours or even days.  In this case, the data use could be a fraction of a kB/hr and far less.

Simply put, the more circuits monitored, the more data used. Verdigris systems can monitor up to 42 circuits. For three-phase equipment this implies 14 devices per system. Depending on the use case, anywhere from one to 42 circuits may be monitored. On average systems are deployed to monitor 21 circuits. Data usage scales as the number of monitored circuits accumulates.

Data Storage: What if connectivity is lost? How many days of stored data is available?

Verdigris systems self-recover from loss of power or network connectivity. Our hardware is fault tolerant to connectivity loss. We use a combination of on board memory and proprietary compression algorithms.

Verdigris systems have 16GB of data storage. How many days of data is available correlates with how much data the system uses. Depending on the behavior of the equipment and number of circuits monitored, it can vary widely from a few days to years.  For example, if devices are sending disparate waveforms every second, then the available data across 42 circuits would be approximately 3 days.  Conversely if the consumption activity on a system has recognized and redundant waveforms then data demands are greatly reduced.  In such cases, stored data from a loss of connectivity can span years.

Did this answer your question?